David Ulin’s Op-ed piece in the Los Angeles Times entitled “Why rely on Uber for our transit future” makes some good points but misses some as well. 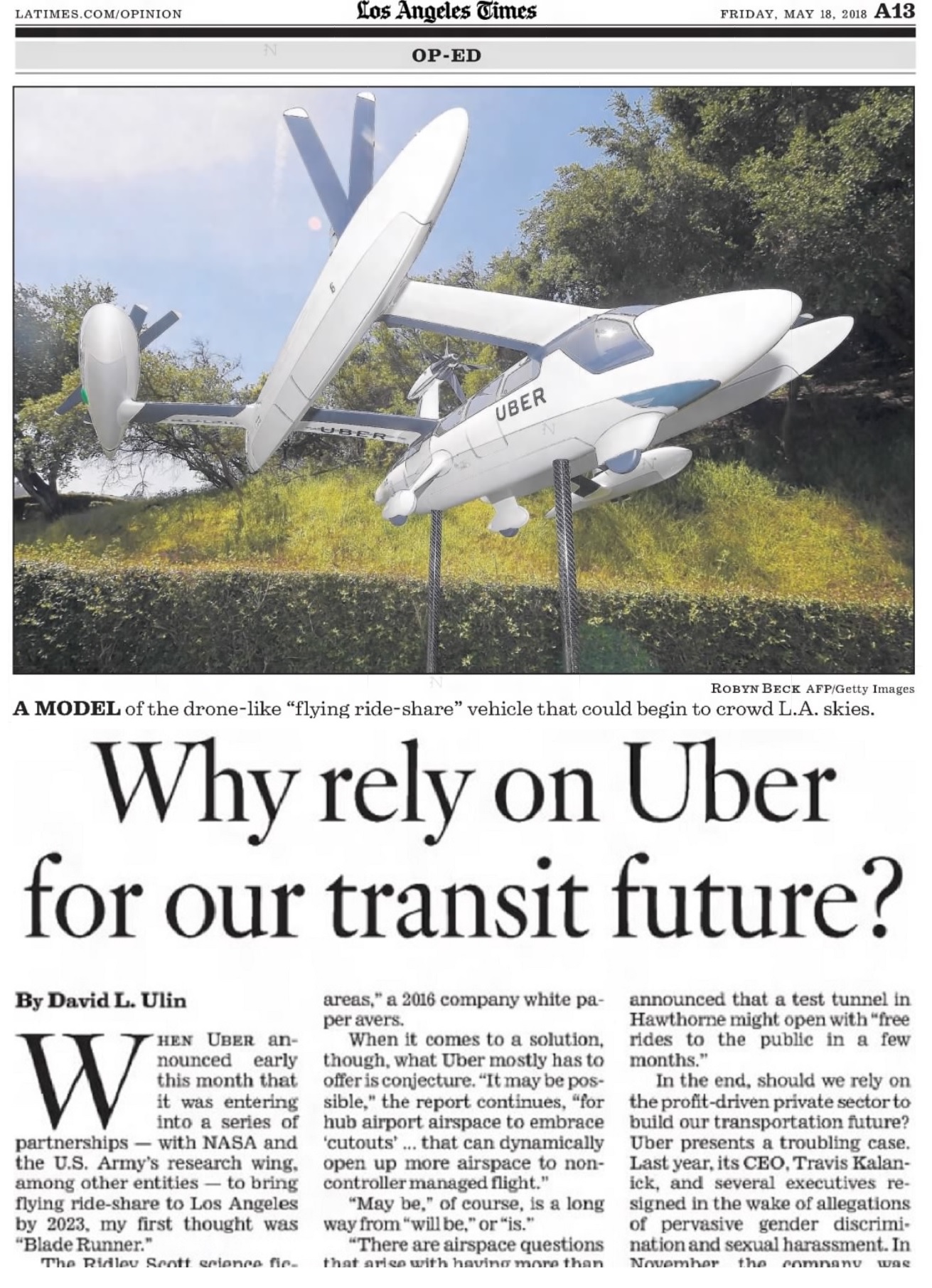 Ulin discusses Uber’s fantasy of flying commute vehicles, stating “The drone-like vehicles on Uber’s drawing boards could mitigate the congestion on our overloaded streets and freeways and zip us across town like VIPs.” 400,000 vehicles a day use the 405. You don’t have to be a rocket scientist to imagine what even trying to replace 25% of that would look like up in the sky with airplane traffic. Short answer: there is no way that is going to happen.

Ulin also makes the mistake of predicting that autonomous vehicles will not solve the traffic congestion problem in the future. The reason autonomous vehicles will solve the traffic problem is because there will be far fewer vehicles per person in use. A given vehicle will be shared by many different people over the course of several hours each day. As opposed to currently where one vehicle is typically used by a single person for one or two hours a day then has to be parked and stored. This does assume that autonomous vehicles will be shared. And they will be shared, since the computer navigation systems will make it economically compelling to have a self-adjusting shared very safe vehicle commuter system where a few individuals share one car. And in most cases you won’t own a car, won’t need insurance, and won’t want either. And, the sharing can and will be dynamic whereby one shares with different people on different trips, automatically adjusting to the time of the commute and proximity of fellow passengers pick-up and drop-off points.

Once shared autonomous vehicles are part of society we will have almost no parking lots, almost no parking, no driveways and all the right of way we currently have will be massively enough to support future traffic. It’s called a shared transportation infrastructure. Even battery charging will no longer be a problem since a vehicle that runs out of battery will go to a centralized battery charging spot and a different vehicle will it take its place for the rest of the day.

The sheer economics of the situation will force this to occur and convince people to give up their cherished one car per person model.

Ulin’s article ignores all this and remains stuck in a concept of one car per person.

Yes wealthy people will still own their own autonomous cars. But one thing Ulin got right is the need for a public infrastructure. Autonomous vehicles will make that much more possible. We won’t need or desire just one Uber or one pair of Uber/Lyft solutions. There can and surely will be many alternatives, with government playing the role of regulation as it does now for traffic laws, safety regulations, etc.

The biggest change will be for people to adjust not owning their own car. Owning a car and space to stow the car will become a luxury item. This massive social adjustment will take time but the economics will be irresistible. Some will prefer to pay for a solo ride. But many, and I think ultimately most, people will end up preferring to share and get to know their fellow commuters. This of course in a context where telecommuting, this avoiding the need to commute, will also become much more prevalent. That’s another subject for another day.